The Last Drop of Oil and Its Everlasting Message

I’d like to dedicate this D’var Torah בזכות עליית הנשמות הקדושות של ציפי ונועם רחל רימל ז״ל שחזרו לבוראם טרם הזמן, ולזכות רפואה שלמה של צבי משה בן שולמית ואיתי יעקב בן ציפורה, שנלחמים על חייהם. Tzippi z”l is remembered by all as a glowing woman who emanated happiness in all that she did. At the Shiva, Tzippi’s sister pleaded with the visitors להמשיך את האור, to continue the light that Tzippi brought into the world, to smile, and emulate her. It is my hope that Tzippi’s light and the light of Chanukah can shine into our world and light the darkness for those in her family and for all of Am Yisrael.

Chanukah poses a significant question. One who reads about the trials and challenges of the Hellenistic time period can understand that Am Yisrael was in a very low spiritual place, and if one widens his research, he’ll find that even after the miraculous military victory over the Greeks, רבים ביד מעטים, there were still tremendous threats that came about not too long after. If this is the case, how can it be that out of all the stories accounted for in מסכת תענית, Chanukah remained as a holiday for Am Yisrael even after the Beit HaMikdash was destroyed? What was so special about this time if it was surrounded by difficulty and assimilation?

In order to answer this question, let’s take a look at one of the hints to Chanukah in the Torah. In פרשת בהעלותך, we learn about the Avodah of the Menorah in the Mishkan, which is placed sequentially after the description of the Dedication of the Nesi’im to the Mishkan. The Mefarshim address the juxtaposition of these two sections.

Rashi quotes the Tanchuma saying that when Aharon saw the dedication of the Nesi’im, he was sorrowed that he and Shevet Levy did not take part in their dedication. Hashem reassured Aharon through the Mitzvah of Menorah by sending him a message that שלך גדולה משלהם. “Your portion is greater than the rest of the Nesi’im, because you light and prepare the Chanukah Menorahs day and night.”

The Ramban asks, why did G-d comfort Aharon through the Avodah of the Menorah and not by seemingly more significant services like the Avodah on Yom Kippur, where אהרן was נכנס לפני ולפנים before HKB”H? The Ramban explains that the Tanchuma mentioned above is a hint referring to the rededication of the 2nd Temple, through Aharon’s descendants, the Hasmonean Kohanim. Aharon is being told, “During this time, I, Hashem, will perform miracles for Am Yisrael through your descendants”. Additionally, Hashem was comforting Aharon in the fact that unlike the Korbanot which are only practiced while the Beit HaMikdash is standing, the נרות of the Menorah will forever give light, even when the Beit HaMikdash is destroyed. Nechama Leibovitch eloquently describes the beautiful outlook of the Ramban. She notes that the Ramban, who is famous for recognizing that the actions of our forefathers are a symbol for their children, also sees the oil Menorah that Aharon lit as a symbol that lasted for all generations, through the Hasmonean Chanukah candles, which would illuminate the darkness of the Galuyot.

Back to our original question on the significance of the holiday which caused Chazal to establish it for all generations: Am Yisrael were so downtrodden. They were spiritually and physically oppressed by the Greeks. Antiochus knew about the special relationship between G-d and Yisrael that was expressed through the Menorah, and therefore commanded for the oils to be defiled. Yet, something changed. The Sages understood that this terrible oppression ignited a spark of dedication within the Jews. Especially in the women, like Yehudit who killed a Greek Hegemon, and the daughter of Matityahu who turned to the Gedolei Yisrael and declared “Enough is enough!” This inspired Matityahu and his sons to rebel.

What miracle are we publicizing when placing the candles outside? I’d like to suggest that the miracle wasn’t just that they found the jug of oil, it was the fact that they still had the desire for the oil to be pure, which parallels the desire for a relationship with Hashem to be pure. It was the נס of the unwavering spirit that Hashem placed within us. And Hashem sent us a sign that He recognizes that eternal connection too, by providing us the pure oil and allowing it to burn for eight days, so that we could create more pure oil.

It is apparent that we are not celebrating the fact that the flames remained lit, but we are celebrating the fuel for the flames. G-d gave us this שמן זית זך and allowed it  to fuel the flames those eight days. This is synonymous to the נשמה Hashem has given us, which is זך וטהור, and continues to be the source of fuel for our Avodat Hashem. That pure point inside of you which remains untainted. As the Chassidim like to call it, the Pintele Yid.

That Nes was translated into our Torah Sheb’al Peh, where we gain the strength to continue to be מחדש in Torah even long after our exile. Chazal created a new holiday that would last for all generations, as Torah Sheb’al Peh would. How do we ignite that spark? Through the Torah that is handed down through the generations, encompasses our purpose as Jews in this world, and serves words as an assurance that we will one day rejoice again in the Beit HaMikdash.

If this is the case, how can we preserve this eternal spirit? The answer can be found in the act of Talmud Torah. The Ktav Sofer, the son of the great Chatam Sofer, writes regarding the מצווה of אל מול פני המנורה יאירו, which states that the candles must be lit facing the central candle. He explains that this is analogous to those who learn Torah. We learn that the candles would burn towards the נר המערבי in the מקדש, which was where they would light the candles. “For the commandment is a lamp, the teaching is a light” (Mishlei 6:23). The נר המערבי is the teacher, who teaches others Torah, and the students are the other candles of the מנורה which face it. Rabi Chanina says : Much have I learned from my masters, and more from any colleagues than from my masters, and from my disciples the most. (Ta’anit, 7a) The Ktav Sofer writes, “First, the Rav learns with his students, and enlightens their eyes, until they become students who enlighten the eyes of their Rav…”  In Masechet Avot, it is written “Rabbi Ishmael his son said: He who learns in order to teach, it is granted to him to study and to teach;. “ Just as Aharon would light the other candles from the נר האמצעי and afterwards, he would light the נר האמצעי from the other candles, so too, when a teacher truly educates and enlightens his students, they come to teach him as well. This is the educational spiral of Torah. With it, we become eternal. When we learn Torah together, we are shining upon each other constantly, ensuring that our pure inner spark is never extinguished.

As we enter the challenging month of Tevet and remember the tragedies leading to our exile , I believe that Chanukah can teach us to enter the month with the hope that we can regenerate the inner strength that we had during the times of Chanukah which still burns within us, no matter how concealed it may seem. 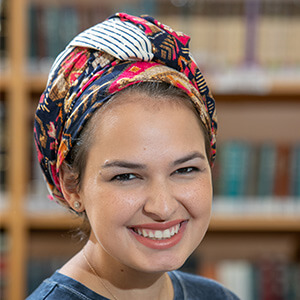 Elisheva White is studying in the Matan Bellows Eshkolot Educators Institute and the Lapidot Mizrachi program. After learning for 2 years in MMY, she made Aliyah and studied in Michlala Jerusalem where she graduated with a Bachelors in Education in both Tanach and English and a teacher’s certificate. She has been involved in formal and informal education both in American and Israeli programs. Elisheva currently lives in Ramat Shilo, RBS with her husband and 2 kids.