﻿ The Almond Tree is Blooming - Matan - The Sadie Rennert

The Almond Tree is Blooming

During this time of year, Jewish children around the world can be heard singing ”Hashkediah Porachat”  This popular song written in the 1930s by educator and poet Yisrael Dushman, highlights the holiday of  Tu B’Shvat as a celebration of nature in the land of Israel when the almond trees start to bloom.  This auspicious day in the middle of the month of Shvat is understood by Beit Hillel (Mishnah Rosh Hashana 1:1) as the New Year for the trees. While intended as a date with significant halakhic ramifications for the tithing of fruits, Tu B’Shvat has captured the hearts of many as a time of rejuvenation.

The almond tree, or shkediah, is first to flower in the winter months, as the whisper of spring is in the air. These blossoms are a harbinger for a new season of growth to come. It seems that the world of nature had been on hold, experiencing a G-dly pause for the winter months.  A sense of joy and relief floods our senses as beautiful white and pink buds emerge in the barren scenery. 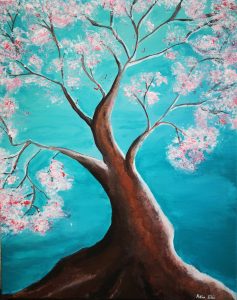 Long before Hashkediah Porachat became popularized, almonds held a positive symbolism in the Tanakh. In the book of Bereishit (43:11), we learn of Yaakov Avinu sending almonds among the gifts sent down to Mitzrayim as part of “zimrat ha’aretz,” understood as meaning choice products for which the land of Israel is praised (Rashi). In the book of Shemot (25:33-34), the distinguished golden menorah in the mishkan is described as being formed with shapes of shkedim on her branches and in the book of Bamidbar (17:23), we see the staff of Aharon Hakohen blossomed with almond flowers and fruit as a sign of his being Divinely chosen.

Perhaps the most poignant and relevant imagery of the almond comes from the root word, שקד, being used as a verb as well as a noun. In the first chapter of Yirmiyahu (v.11-12), the prophet has a vision of a branch of almond tree, “מַקֵּל שָׁקֵד אֲנִי רֹאֶה” as a sign of Hashem swiftly fulfilling His promises of upcoming exile and destruction, as He says “ki shoked ani al dvari la’asot; For I watch over My word to perform it.” As we mentioned above, the almond trees blossom quickly, or early in the season and it is therefore fitting imagery in this nevuah of imminent calamity by the Watchful Creator.

Just as almonds come in two species, bitter or sweet, so too, two types of prophecies will come to fruition, both with the root sh.k.d. The initial prophecy is of exile and destruction while subsequently these words correlate with an expression of comfort and redemption (Jeremiah 31:27-28).There Hashem tells us:

And it shall be, as I have made efforts for them to speedily uproot, break down, demolish, destroy and to afflict, so will I persevere to build and to plant, says the Lord

He explains here that the uprooting is required in order to plant and the breaking down is an essential component in order to build. Just as one who plants a seed in the ground earnestly awaits for it to disintegrate in the soil so that it can sprout and yield fruit, so to the Malbim profoundly elucidates that we are unveiling a Divinely choreographed imperative where devastation yields flourishing growth. It is no mere coincidence of a repetitive word choice, nor is one action merely the correction of another but rather the root word sh.k.d is associated with this progression where the very thing that seems most dreadful is in fact a stepping stone towards expansion, growth and beauty.

There is a Season

Emunah wisdom means recognizing that we don’t know how long a season will last but we welcome each season in our lives with open, trusting arms. The book of Kohelet (3:1-8) poetically portrays this;

While these words were popularized by The Byrds’ lyrics, we will translate the words here as: To every thing there is a season, and a time to every purpose under heaven. A time to be born, and a time to die; a time to plant, and a  time to uproot.

I have observed the issue that G-d gave man to be concerned with; He brings everything to pass precisely at its time…from beginning to end

This message in Kohelet is embedded in our understanding of the almond blossoms. When we grapple with emunah questions- an inevitable part of the human condition- we are equipped with this song and imagery “la’anot bo” with which to answer ourselves. All that Hashem does is at the perfect time, every step of the way in our life journey, without exception. In truth, girded with emunah, we can be confident that there actually aren’t any G-dly pauses in this world, however much our observations might point to the contrary. Winter is a crucial part of spring, just as suffering is a crucial part of celebration, failure an essential ingredient to success and bare branches a critical component to eventually seeing blooming flowers.

Emunah means placing trust in things unseen. Even when the tree branches seem dry, bare and lifeless, beneath the surface there is hidden movement. The sap stored in the roots is stirring, rising and providing nutrition for flower buds and emerging leaves.  A fine-tuned level of emunah grasps Hakadosh Baruch Hu omnipotently and benevolently, orchestrating everything from the most simple organism to the most complex systems in this world. When one’s emunah is at work, we don’t just say “this too shall pass.” People girded with faith walk with serenity, tranquil in the knowledge that, no matter what period they may be going through, this is the season they are meant to be in and God is watching over them as the planter watches the seed, waiting for it to develop.

From seed to sapling, you are a tree. For a person is the tree of the field – כִּ֤י הָֽאָדָם֙  עֵ֣ץ הַשָּׂדֶ֔ה (Devarim 20:19), evolving into a more beautiful version of yourself even though your colorful foliage may have left, some of your external beauty seems dulled. Bare or blooming, you can proclaim “my branches reach out to kiss the heavens and I know that this season I am in, this moment I am in, is blessed”.

is a graduate of the Matan Bellows Eshkolot Educators Institute. She has been teaching Tanakh and machshava over the last two decades, initially on college campuses and in Hebrew Schools in the New Jersey area. Since making aliyah in 2005, she has given weekly shiurim in Hebrew and English to women in her community. Adina has taught in the ALIT program and Rosh Chodesh seminars run by the OU Women's Initiative as well as in the mother-daughter "learn and art" program of OU Israel. She is known for her unique ability to facilitate in-depth textual learning along with engaging and relevant discussions. Adina lives with her husband and children in Yad Binyamin.